Click here for photos from the Rise Up Challenge 2020.

Click here for photos from the Athletics Commitment from fall 2019.

Click here for photos from the Athletics Commitment from spring 2019.

View news below or click on the links to read MMA Athletic news items and stories that have been published in area papers.

Basketball Team Shines On and Off the Court

Coach Gretta Ehret Inspires Us All to Dream Crazy

Field Hockey played in the first round of the PIAA 2A State Championship and defeated Berks Catholic (4-0). Next up is the quarterfinals against Villa Maria on Saturday at Methacton at 3 p.m.!

Field hockey wins the 2019 AACA league championship with a 2-0 win over Villa Maria!

Congratulations to Madison Ott '20 and Chloe Abramowitz '21 who placed second in doubles in the AACA League championship!

Chloe Abramowitz '21 won the 2019 AACA League tennis singles championship! This qualifies her to participate in the PIAA District championship in October. She is also undefeated in the season!

Rowing Enjoyed a Winning Day at the Stotesbury Cup Regatta

Seniors Katie Ernst, Sonja Bjornson, and Diamond Figueroa Commit to Athletics on the Collegiate Level, Joining the Group of 10 Who Were Honored Last Semester

SwiMMAs Make a Splash at Districts

Field Hockey defeated Great Valley 2-0 and heads to District Finals of PIAA! They will play Villa Maria on 11/3 at 3:30 at Methacton.

Kings Head Regatta
MMA Rowing took two golds, JV4+ and JV8+, and Varsity 8+ won silver at the 2018 Kings Head Regatta! The team honored the memory of alumna Jackie Fioravanti '12, (who passed in 2013) during the event. Earlier that same morning, many of the team ran/walked in the CHOP 5K to also honor Wylie, the child of an MMA friend who also had passed away from cancer.

Tennis
Chloe Abramowitz, Nina Dzidic, Madison Urbano, and Madison Ott represented Merion Mercy as they competed in the AA District 1 Doubles Qualifying Tournament. Maddie and Maddie made it to the second round of the tournament and Friday Chloe and Nina will play in the Tournament Championship against Gwynedd Mercy. Go "Mennis"! 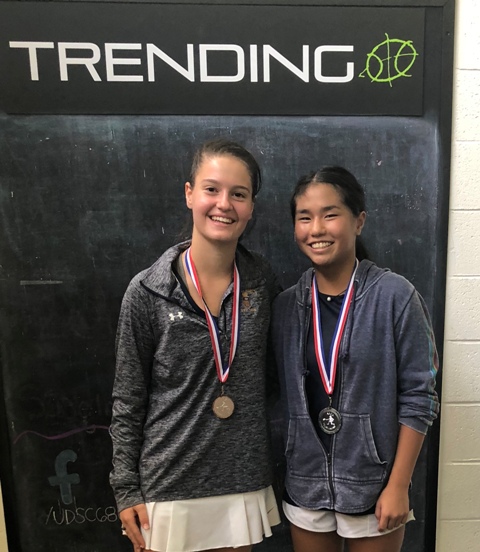 Tennis coach Katie Smith shared, "I am so proud of their excellent performance, skill, effort, and sportsmanship throughout the entire tournament. Chloe and Nina have excelled on the court this season, and Coach Bob and I look forward to more successful matches over the next few weeks! They are excellent leaders of our team. We look forward to Chloe (and possibly Nina!) competing in the next level of the District tournament."