Coach Mike Brown knew he had something special in Merion Mercy Academy's Lightweight 4+, as they had already won national gold medals at the Stotesbury Cup and SRAA National Scholastic regattas with a seasoned crew of seniors Izzie Begley, Taylor Gregitis, Erin Welch, and Cece Wendel coxing, with junior Phoebe DeVlieger in stroke.

While winning against other high school teams is impressive, entering the USRowing Youth Nationals is a whole other level, competing against club teams representing a city with select athlete all stars pulled from the region. TheUSRowing Championships sees 1,600 athletes competing in more than 350 crews, representing some 150 teams from across the country at Benderson Park in Sarasota-Bradenton, Florida. This site also hosted the 2017 World Rowing Championships.

Going in as underdogs for Saturday's semi-finals, Merion Mercy Academy hung on to win their semi-final heat in what the site announcer called "the best race of the day." The photo finish had them winning by only 0.14 seconds, with only a little over a second separating their boat from the next three boats–two from Seattle clubs and one from the powerhouse Saugatuck Boat Club in Connecticut.

Sunday's final had less drama, despite facing the same two Seattle clubs who had pushed them so hard in the semi-finals. 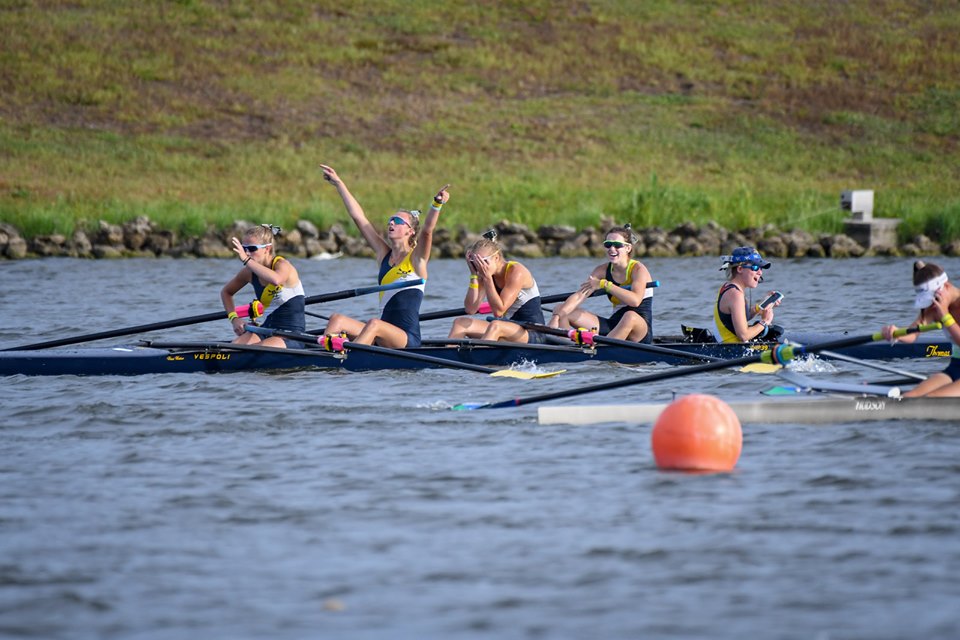 Merion Mercy Academy won wire to wire by over two seconds, with a time of 7:16:206.  As Coach Mike Brown laid out in a text the night before, the boat was in Jason Kelce underdog territory, as Merion Mercy Academy was one of only three scholastic programs to make the women's finals out of over 30 events.

His text finished with a statement that would be even more true after Sunday's Finals: "108 boats will compete in 18 'A' finals events on Sunday morning.  Of the 18 events, nine are men's and nine are women's. Of the 54 women's boats competing in the 'A' finals, only five are scholastic programs while 49 are clubs. Of the 30 finalists in the five women's sweep events, only three are scholastic programs–one of which is your Merion Mercy Academy! Rare air, rare air indeed!"

The Lightweight 4+ to compete for the Groton Cup at the Henley Women's Regatta. The season ended in the quarter finals after a stellar showing.

Click here to view photos from the Henley send off.